This was the day The Lord made! We rejoiced and were glad!

We arrived in Arba Minch yesterday afternoon and checked into our hotel. There’s definitely a sense of long-held anticipation nearing it’s completion. We have joyfully greeted several of our Ethiopian brothers and sisters in Christ, and are anxious (Understatement!) to join them in encouraging the believers here and in being used by God to bring more into the Kingdom. (Pray!)

Today began with Rachel’s devotion on the topic of peace – peace that passes understanding in stressful times. Yes, some of us were a bit stressed – international travel, worrying over whether we are properly prepared for the important work God has for us, and fearing crocodiles and hippos, etc.

That’s right crocodiles and hippos. We rode in boats on Lake Chamo (2nd largest in Ethiopia!) to see crocodiles and hippos. The birds (white pelicans, Egyptian geese, Maribu storks, plover!) were a bonus. Allison J. says she saw 18 crocodiles. (Upclose, but not too unclose!) The beauty was mesmerizing. It was impossible not to marvel at the creation and even more, the Creator. “Can you draw out Leviathan with a hook or snare his tongue with a line which you lower?”

Later in the afternoon we went on a long but bumpy ride to the Highlands to see a typical Saturday “Farmer’s Market.” It would be impossible to paint this scene with words, I’ll attach a picture. The market was in a city called Chemcha and the people were of the Dorze tribe. They make the most colorful and beautiful scarves and hats, and their fences and dwellings have an artistry that is singularly impressive. 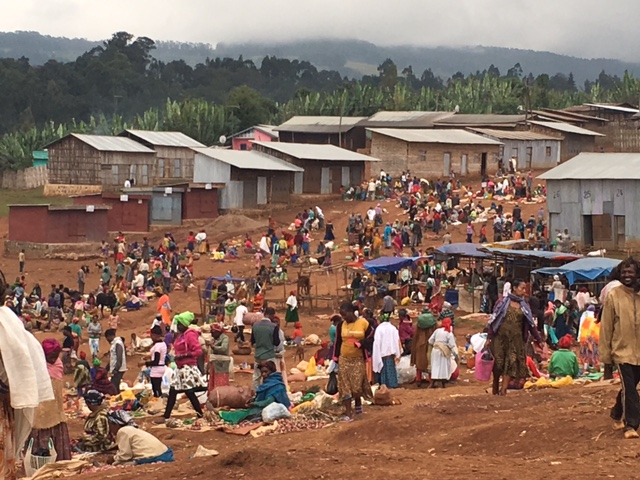 We also witnessed upclose how very poor the people are. It’s hard to take in poverty like this. (Tears fell!) How wonderful it will be to return to the area next week to offer hope to a people who desperately need an eternal perspective.

The day concluded with Melissa’s devotion on overcoming fear through faith. It was a word that God gave her to share with the team. She had never before given a devotional talk, but was given confirmation that this was her moment and God’s message. (Cool!)

Tomorrow we will visit 3 churches that were planted after other E-3 teams shared the gospel here (Talk about cool!)

One thought on “September 2016: Saturday at the Farmer’s Market”